But How to Explain That the 1633 Decree Was Disseminated Throughout the Church? 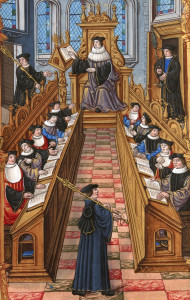 Finally, the new geocentrists point out that the 1633 decree against Galileo was disseminated throughout the Church and from this fact they argue that geocentrism continues to have standing as an established doctrine in the Catholic Church.  Sungenis has argued this in the most detail.  He cites Dorothy Stimson to the effect that:

Pope Urban had no intention of concealing Galileo’s  abjuration and sentence. Instead, he ordered copies of both to be sent to all inquisitors and papal nuncios that they might notify all their clergy and especially all the professors of mathematics and philosophy within their districts…” (The Gradual Acceptance of the Copernican Theory of the Universe, 1917, pp. 67-68)

He makes sweeping claims for the authority and the scope with this alleged invests the 1633 decree:

[Pope] Urban upheld the 1616 Sacred Congregation’s verdict of “formal heresy” for Copernicanism and “vehemently suspect of heresy” for Galileo after obtaining Galileo’s renunciation in 1633. He sent notice of the condemnation to all the inquisitors and papal nuncios of Europe, making it an official proclamation of the Vatican. (GWW2, 34).
The magisterium’s actions were unprecedented. From this evidence one could argue that such pervasive and regimented procedures were at least reasonably close to the criteria required for a binding and irreformable teaching (GWW2, 278).
In fact, the Church’s historic teaching on geocentrism and her condemnation of heliocentrism fulfills all the criteria of Lumen Gentium 25 . . . During the condemnations against heliocentrism the Church issued some of the most detailed and comprehensive decrees ever written. Every wrinkle of the issue was investigated, arguments were presented and rebutted, witnesses were put under oath, experts were called in for testimony, the most severe and condemnatory language was formulated in the final decree, that is, that heliocentrism was “formally heretical” and “erroneous in faith.” If geocentric doctrine does not qualify under the rubrics of Lumen Gentium 25, what does? (GWW2, 281).

Of course I readily admit that the seventeenth century hierarchy did not want Copernicanism spread and took steps to prevent it.  The pope made a prudential decision that Copernicanism would be harmful to the common good of the Church and he moved strongly against it.  But the rest of Sungenis’s analysis is flawed by the same fundamental errors and exaggerations we’ve already examined.
A moment’s reflection shows that the mere fact that this decree was disseminated throughout the Church by itself does not answer any of the fundamental questions.  Disciplinary documents like the Code of Canon Law and the Index of Forbidden Books are also distributed throughout the Church and bind Catholics to obedience, but they are openly acknowledged to be disciplinary and are subject to change.
Indeed, the fact that this decree was disseminated to the nuncios and inquisitors, not to the bishops, is actually an indication that it is a discipline being enforced and not a doctrine being formally defined.  When the Pope issues a doctrinal decree, as contained in a papal encyclical for example, it is sent first and foremost to the bishops, as the guardians of the Faith in their dioceses—in fact, such papal document often contain exactly that language, being addressed to “Our Venerable Brethren, All Patriarchs, Primates, Archbishops, and Bishops of the Catholic World, in Grace and Communion with the Apostolic See.” (taking Pope Leo XIII’s encyclical Providentissimus Deus as an example.)
But more importantly we must return to our first point—the most fundamental issue: The 1633 decree addresses a strict Copernicanism and no more.  And Sungenis is simply wrong when he states that Copernicanism had been found to be “formally heretical” and “contrary to the faith”.  Neither of those two things forms part of the sentence of the 1633 decree and strict canonical interpretation forbids us to read that sentence any more strongly.
I’ve already made the point elsewhere, namely, that the seventeenth century popes knew very well how to define a doctrine and make it binding on the universal Church.  But this they never did with respect to Copernicanism or any other cosmological view.  Again the Protestant scholar Karl von Gebler lays out a very balanced view:

Undoubtedly Pope Paul V. wished the decree made and privately instigated it, as Urban VIII. did the sentence against Galileo; and in this sense the former may be attributed to the one and the latter to the other, and the condemnation of the Copernican theory to both.  But in this they acted as private persons, and as such they were not (nor would they now be), according to theological rules, “infallible.”  The conditions which would have made the decree of the Congregation, or the sentence against Galileo, of dogmatic importance, were, as we have seen, wholly wanting.  Both Popes had been too cautious to endanger this highest privilege of the papacy by involving their infallible authority in the decision of a scientific controversy; they therefore refrained from conferring their sanction, as heads of the Roman Catholic Church, on the measures taken, at their instigation, by the Congregation “to suppress the doctrine of the revolution of the earth.”  Thanks to this sagacious foresight, Roman Catholic posterity can say to this day, that Paul V. and Urban VIII. were in error “as men” about the Copernican system, but not “as Popes.”  (Karl von Gebler, Galileo Galilei and the Roman Curia, trans. J. Sturge, London: C. Kegan Paul & Co., 1879, pp. 235-6)

Setting aside all the geocentrist exaggerations and errors we find that the 1633 decree was a disciplinary decree against an individual, which addresses a strict Copernicanism and only that, which does not say that Copernicanism is a formal heresy, which was never signed by the pope, and which was sent not to the bishops as the guardians of the Church’s Faith, but to the inquisitors and papal nuncios as guardians of the Church’s discipline.
In due course and in due order, the Church relaxed the discipline against the teaching of non-geocentric views.  Today, we as Catholics have complete freedom to evaluate and hold non-geocentric cosmological views.
Back    Next