Sungenis vs. Pope Benedict XV: Was Dante a Marginal Catholic?

Anyone who has followed Robert Sungenis’s many controversies through the years knows that when he is emotionally invested in a subject, he often fails to maintain a reasonable level of objectivity and scholarly standards.  For instance, in the service of geocentrism, Sungenis has more than once turned documentary evidence completely on its head, (see, for example, “Sungenis and Pius VII: Turning the Evidence on its Head” and “It’s All In the Translation”.)

The latest example of this can be found in his response to my article “Geocentrists Peddle Alien Theology of Centrality”.  There I demonstrated that the geocentric claim that the Earth’s supposed physical centrality in the universe confirms our significance to God is completely alien to classical Western thought and Catholic tradition.  It’s a theological novelty. 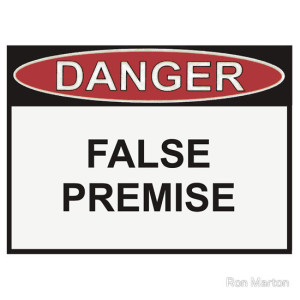 What the new geocentrists have actually done is adopt the false premise of modern critics of the Church and concocted a fundamentally erroneous theology in response.  As I explained in my article, for ancient and medieval Christians the center (and hence for them the Earth) was actually seen as the most base and unexalted location in the universe.  I wrote: “For sixteen centuries, Aristotelian/Ptolomaic cosmology held sway among Christian thinkers.  That cosmology considered the Earth to be in the lowest, most degraded and least privileged place in the entire universe.”  And this was seen as perfectly compatible with Christian theology. 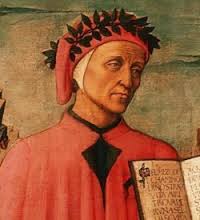 The pith of Bob Sungenis’s response to my article was to claim that only pagan and not Christian writers held such a lowly view of the Earth.  This is false, as I plan to demonstrate in more detail in an upcoming follow-up article.  But to focus on one example, Sungenis, who has no particular expertise in medieval theology and literature, summarily dismissed the testimony of widely acclaimed medievalist C. S. Lewis, who pointed to Dante as a medieval writer whose work very much reflected the lowliness and insignificance of the Earth:

Because, as Dante was to say more clearly than anyone else, the spatial order is the opposite of the spiritual, and the material cosmos mirrors, hence reverses, the reality, so that what is truly the rim seems to us the hub … We watch ‘the spectacle of the celestial dance’ from its outskirts. Our highest privilege is to imitate it in such measure as we can. The medieval Model is, if we may use the word, anthropoperipheral. We are creatures of the Margin (The Discarded Image, 58).

To this Sungenis replied:

R. Sungenis: Of course, the problem with Dante was always whether he was accurately depicting the Christian faith, and his devotion to it was always questioned. Benedict XV had mentioned Dante’s peculiar ideas in his April 30, 1921, encyclical titled, In Praeclara Summorum, although he exonerated Dante from being a pseudo‐believer (“David Palm Peddles Alien Arguments Against Geocentrism”, p. 9).

You might want to read that remarkable claim again.  According to Sungenis, it’s obvious to all, that it has “always” been a “problem” to know “whether [Dante] was accurately depicting the Christian faith.”  Sungenis claims that Dante’s “devotion to [the Faith] was always questioned” (my emphasis).  Seeking to damn Dante with faint praise, Sungenis claims that in his encyclical In Praeclara Summorum on Dante, Pope Benedict XV merely, “mentioned Dante’s peculiar ideas” and only just, “exonerated Dante from being a pseudo‐believer.”

What the Pope Really Wrote:

Is that really what Pope Benedict XV wrote?  Look for yourself.

The very opening lines of the encyclical In Praeclara Summorum state:

Among the many celebrated geniuses of whom the Catholic faith can boast who have left undying fruits in literature and art especially, besides other fields of learning, and to whom civilization and religion are ever in debt, highest stands the name of Dante Alighieri, the sixth centenary of whose death will soon be recorded. Never perhaps has his supreme position been recognized as it is today. Not only Italy, justly proud of having given him birth, but all the civil nations are preparing with special committees of learned men to celebrate his memory that the whole world may pay honour to that noble figure, pride and glory of humanity (emphasis mine here and throughout.)

And surely we cannot be absent from this universal consensus of good men; rather should We take the lead in it as the Church has special right to call Alighieri hers.

In the fourth paragraph the Pope describes this virtual “pseudo-believer” thus,

the divine poet throughout his whole life professed in exemplary manner the Catholic religion, . . .

And then further down, apparently struggling to recognize “whether [Dante] was accurately depicting the Christian faith,” Benedict XV highlights Dante’s especial devotion to St. Thomas, Scripture, and the Fathers of the Church:

Dante lived in an age which inherited the most glorious fruits of philosophical and theological teaching and thought, and handed them on to the succeeding ages with the imprint of the strict scholastic method. Amid the various currents of thought diffused then too among learned men Dante ranged himself as disciple of that Prince of the school so distinguished for angelic temper of intellect, Saint Thomas Aquinas. From him he gained nearly all his philosophical and theological knowledge, and while he did not neglect any branch of human learning, at the same time he drank deeply at the founts of Sacred Scripture and the Fathers. Thus he learned almost all that could be known in his time, and nourished specially by Christian knowledge, it was on that field of religion he drew when he set himself to treat in verse of things so vast and deep.

Geocentrism: Not a Matter of Faith

Then we come to a passage of the encyclical that has already been highlighted on this site (here, here, and here). Perhaps this passage is the key to understanding why Sungenis has gone to such lengths to distort and downplay the Pope’s encyclical. Pay close attention to what the Pope wrote here:

If the progress of science showed later that that conception of the world rested on no sure foundation, that the spheres imagined by our ancestors did not exist, that nature, the number and course of the planets and stars, are not indeed as they were then thought to be, still the fundamental principle remained that the universe, whatever be the order that sustains it in its parts, is the work of the creating and preserving sign of Omnipotent God, who moves and governs all, and whose glory risplende in una parte piu e meno altrove; and though this earth on which we live may not be the centre of the universe as at one time was thought, it was the scene of the original happiness of our first ancestors, witness of their unhappy fall, as too of the Redemption of mankind through the Passion and Death of Jesus Christ. 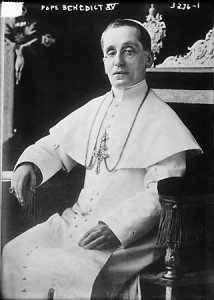 It’s plain from this passage that Benedict XV did not consider geocentrism to be part of the Catholic Faith. As such, perhaps Sungenis was confused. Perhaps it was not Dante, but rather Benedict XV who needed to be “exonerated…for being a pseudo-believer” because he dared to doubt the geocentric “dogma” that the Earth is the immobile center of the universe?

The geocentrists have attempted to escape the force of the pope’s statement here, but it is presented in a simple, “If A is not true, nevertheless B is still true” form.  If the geocentrists want to argue that this statement leaves open the possibility that geocentrism is a core doctrine of our faith, let’s turn it around and consider the results.  What if the pope had said instead, “If this earth on which we live was not the scene of the original happiness of our first ancestors . . . as too of the Redemption of mankind through the Passion and Death of Jesus Christ, nevertheless it is the center of the universe.”  Would they still consider his statement to be doctrinally acceptable?  Not a chance. It’s plain that Pope Benedict XV was saying that the Earth’s physical location in the cosmos is a matter of doctrinal indifference, while the latter portion of our Fall and Redemption remains a core part of our Catholic faith.  (See also the ruling by Pope Pius VII giving official permission for Catholics to hold non-geocentric views: “The Magisterium Rules: The Debate is Over”.)

Thus, as he based the whole structure of his poem on these sound religious principles, no wonder that we find in it a treasure of Catholic teaching; not only, that is, essence of Christian philosophy and theology, but the compendium of the divine laws which should govern the constitution and administration of States

So powerful is Dante’s representation of the Faith, says Pope Benedict XV, that it has resulted in more than one conversion.  The Pope states that Dante’s writings are firmly grounded in the true Faith, as expressed by the Fathers and Doctors of the Church.  And finally, the Pope closes by exhorting teachers, especially, to study Dante more and more deeply precisely in order to enhance their “devotion to the Catholic Faith”:

And you, beloved children, whose lot it is to promote learning under the magisterium of the Church, continue as you are doing to love and tend the noble poet whom We do not hesitate to call the most eloquent singer of the Christian idea. The more profit you draw from study of him the higher will be your culture, irradiated by the splendours of truth, and the stronger and more spontaneous your devotion to the Catholic Faith.

So Much For the Pope: Now What About Bob?

Those are the Roman Pontiff’s views, in his own words, expressed in a papal encyclical.  Now, let’s look at Sungenis’s tendentious characterization again:

R. Sungenis: Of course, the problem with Dante was always whether he was accurately depicting the Christian faith, and his devotion to it was always questioned. Benedict XV had mentioned Dante’s peculiar ideas in his April 30, 1921, encyclical titled, In Praeclara Summorum, although he exonerated Dante from being a pseudo‐believer. 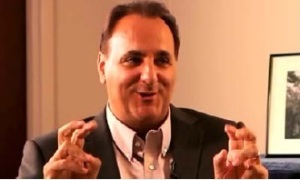 It seems fair to ask, if the pope’s encyclical In Praeclara Summorum only just rescues Dante from the fate of being a “pseudo-believer” who held “peculiar ideas”, what would the Pope have to say to describe Dante as a true believer?

It’s important to ask ourselves too, why did Sungenis go to such lengths to dismiss Dante and to mischaracterize Pope Benedict XV’s statements about him in the first place?  Because he felt it was necessary in order to defend geocentrism.  Sungenis has publicly stated that he believes God has given him the mission of convincing the world that geocentrism is true and he has also said that he intends to spend the rest of his life pursuing it.1

So, once again, we see that when Robert Sungenis is heavily, emotionally (and in this case financially) invested in a topic – as he is with geocentrism – he can’t be relied upon to provide a fair and accurate account of the evidence. And that’s true whether we’re talking about magisterial documents, Scripture, or science.

1 “I am pursuing one of the greatest projects the Lord has ever given me. It is to tell the world that the Catholic Church was right when it condemned Galileo, and thus no Catholic has to hang his head in shame…THAT is why I am pursuing the Galileo issue, Wes – because the right view of it can change the world and restore the Church to her rightful place of honor. I’m going for the whole enchilada. If Galileo was wrong and the Church was right, you can imagine what an impact that will have on our whole view of ourselves and the modern age. That is what I call the ultimate “apologetic,” and that is what I will be pursuing the rest of the time the Lord gives me.” ~ Robert Sungenis

This entry was posted in Credibility, Magisterium, Theology. Bookmark the permalink.