St. Maximilian Kolbe Was No Geocentrist 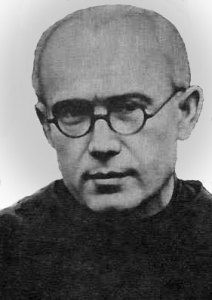 The Kolbe Center for Creation is an organization peddling young Earth creationism and, more recently and frequently, geocentrism as official teachings of the Catholic Church. They’re wrong on both counts. But it’s worse than that for them. Ironically, Fr. Paul Robinson, author of The Realist Guide to Religion and Science has recently discovered that the chosen patron of the Kolbe Center, St. Maximilian Kolbe, actually disagrees with the Kolbe Center on these very points!  This means that, according to the Kolbe Center’s rhetoric, their own patron fell for modernist and pernicious lies fundamentally opposed to the Catholic Faith.  But Fr. Robinson notes,

St. Maximilian did not find these positions to be injurious to the faith; on the contrary, he expressed them in an issue of his Japanese version of The Knight of the Immaculata and concluded them with an argument for the existence of God….If his Knight of the Immaculata article from above were submitted anonymously to the Kolbe Center, it would certainly receive a negative review….The fact is that St. Maximilian did not agree with the central tenets of the Biblicist creationism on which the Kolbe Center is founded. The Kolbe Center professes to have chosen him as its patron, because ‘he was an expert in theology, philosophy, and natural science’, but it does not follow him in questions of natural science nor those of exegetical science.

This entry was posted in Uncategorized. Bookmark the permalink.