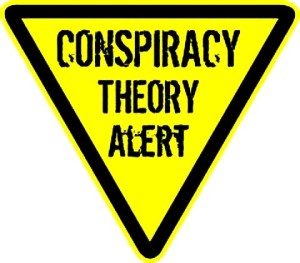 I have often characterized geocentrism as a massive exercise in special pleading, gummed together with conspiracy theories.  I received an email recently from a Sungenis fan that exemplifies the latter part of that formula admirably (and gives you an idea of the kind of correspondence that this site can generate):

I just stumbled on your Website earlier and found your rebuttal of Sungenis to be poorly done.  Talk about Ad Hominem, wow.  But when I saw that you were taking shots at “conspiracy theorists” such as Sungenis and Jones on subjects such as 911 and the so-called holocaust I had to write and express my sentiments.

Concerning 911, I have to ask what part of the official conspiracy theory do you actually find believable?  Seriously, you seem like an educated man, so I find it difficult to believe you actually think 19 Arabs with toy knives pulled that job off.  I’m sorry but I can’t help myself: this makes me want to call you a liar. However, I withhold the accusation for the reason that you could be just brain washed and incapable of critical thinking on the subject.

Moon landings?  Do you really think we sent people to the moon?  If you do, you are one gullible individual.  But again, you do stand in the majority (at least in the US).

But I suspect the real issue is not Geocentrism, 911 or the moon landings. The real issue is about the Jews isn’t it?  I don’t think you like that the cast of characters who happen to uphold Geocentrism also happen to be critical of the alleged holocaust.  It pisses you off that some people have actually taken the time to study the claims and found them to be bullshit. And its not just Gentiles preaching this, but also many Jews.  I suppose you would call them anti-Semites also?  Well, if you want to be fair, why don’t you criticize the Jews for not believing in the death and resurrection of Jesus Christ?  Why are Christians called anti-Semites and lunatic conspiracy theorists for denying the holocaust, but Jews are given an exemption on the divinity of Christ?  For the record, I am not a man of any religion, so I have no stake in the argument.  But your hypocrisy is noted.

As I said, I find it difficult to believe any educated person who takes the time to study these events can come away unconvinced of conspiracies. Nevertheless, it does happen.

jon
PS From what I can tell the moon’s shadow during a solar eclipse goes the wrong direction according to the theory of a spinning earth.  [My note: For an explanation of this that does not require any conspiracy theories, see here.]