The Derivation and Meaning of the CMB Anisotropy Vectors

A more formal analysis of the derivation and

meaning of the CMB anisotropy vectors

In “Yes, the CMB Misalignments Are a Problem for the New Geocentrists“, we have explained that the CMB anisotropy vectors carry no position information and do not point directly, or even approximately, at the Earth, as the neo-geocentrists claim. We recognise that most people reading that article will be satisfied with the explanations we have already given, but of course the nature and interpretation of these vectors is based on their mathematical definition within the physical framework. So for those of you who have the interest, we have included this second article, which takes a more formal approach to showing that the fundamental proposition of the Principle movie and much of the geocentrists’ recent propaganda efforts – which is that the CMB anomalies are evidence for the central (or near-central or special) location of the Earth in the Universe – are based on an erroneous interpretation of the physics and data analysis of the CMB.

Representation of the CMB as spherical harmonics

As far as this analysis goes, we are not interested in the absolute temperature of the CMB, but in its variation with direction, so we define a variable on spherical co-ordinates:

where ΔT is the CMB anisotropy on the sphere, T the temperature in direction (θ, Φ) and <T> the average temperature. Since ΔT is defined on a sphere, we can decompose the CMB anisotropy into a series of spherical harmonics or multipoles (this process is analogous to the much better known idea of a Fourier series in which the function of a variable is decomposed into the sum of an infinite harmonic series of sinusoids). The mathematics is absolutely standard and can be found in numerous text books and websites.[14] We decompose the anisotropy signal into an infinite series of multipoles (l, m):

and Plm are the associated Legendre polynomials [2] [3]. So according to Eq. 2 and Eq. 3, the entire CMB anisotropy is the sum of an infinite series of independent multipoles of order l, where l defines the angular size and number of lobes of each multipole so that: l=1 is the dipole with two lobes, one warmer, one cooler, and each lobe covers half the sky; l=2 is the quadrupole with four lobes, two warmer, two cooler and each lobe covers a quarter of the sky; l=3 is the octopole with eight lobes etc. The index, m, which ranges from –l to +l, determines how the warm and cool lobes are interleaved on the sky.

A similar but visually more exciting graphic can also be found on-line [5].

The well-known CMB anisotropy power spectrum is derived from the coefficients alm of the multipole decomposition in Eq. 2 by:

The temperature fluctuation is usually plotted as l(l+1)Cl/2π: 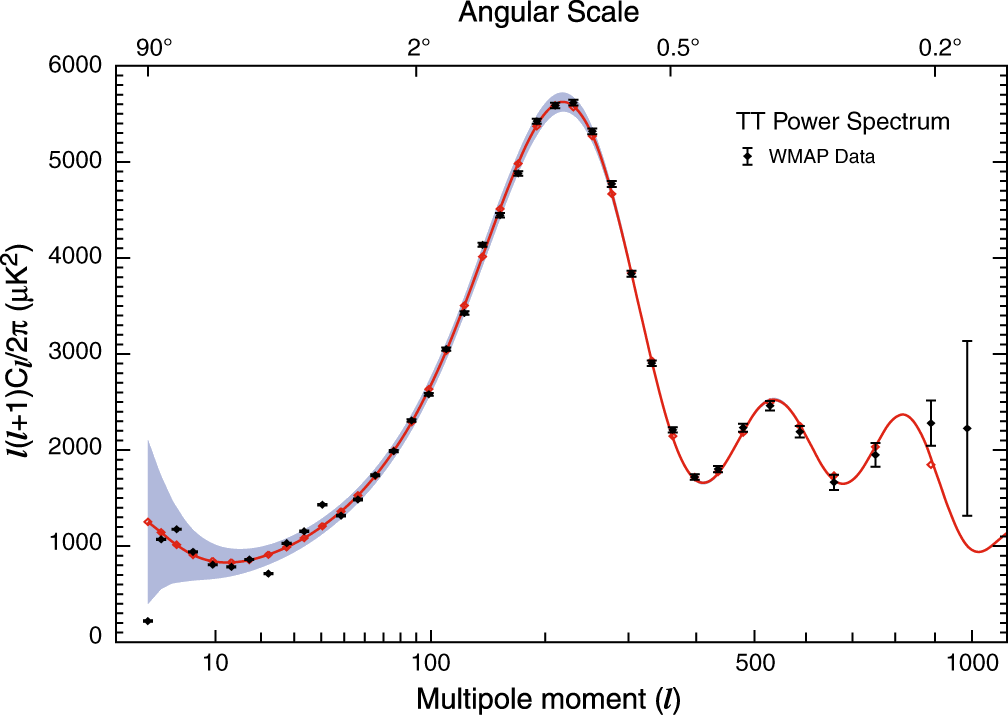 Fig 2. The three-year WMAP CMB power spectrum. The vertical axis represents the amount of anisotropy and the horizontal axis represents the scale, with large scale modes towards the left and fine scale modes to the right. The theoretical prediction of the standard ΛCDM model is the red curve and the experimental data are the black points with error bars. Source NASA/WMAP Science Team#

Directions associated with the multipoles

So, let’s look at the various means that have been used to define directions associated with individual multipoles.

We’ll begin with the definition and method of Copi et al [6]. Each multipole can be defined as follows, either as a spherical harmonic or in terms of multipole vectors:

Copi et al, and Abramo et al say this about the multipole vectors:

These unit vectors v(ℓ,j) are only defined up to a sign (and are thus “headless vectors”), as a change in sign of the vector can always be absorbed by the scalar Al We have chosen the convention that multipole vectors point in the northern Galactic hemisphere, although when plotting them we often instead show the southern counterpart for clarity. [6]

This “reflection symmetry” implies that the multipole vectors define only directions , hence they are “vectors without arrowheads” living on the half-sphere with antipodal points identified [8] [My emphasis]

Both papers make it clear that the multipole vectors define only directions of CMB features on the spherical surface of last scattering and do not carry information about the position of the Earth (or any object in the Universe). Indeed, that is obvious from the fact that the entire analysis is carried out in spherical co-ordinates (θ, Φ) (and not in (r, θ, Φ)).   The vectors identify directions of CMB features and they are a function of (θ, Φ) and so are unable to define positions in R3. The vectors necessarily originate at the point of observation, and therefore it can be said that all the CMB vectors (including but not limited to the multipole vectors) “pass through” the Earth because that is where we are [9]. A hypothetical alien 100 million light years away doing these measurements and this analysis would acknowledge that all the multipole vectors originate at his location. Note also that the vectors are only defined up to a sign – we can’t distinguish between û(l , i) and – û(l , i) – in other words, they define the orientation of a plane, but they do not resolve the +/- direction ambiguity. As we’ll see, this sign degeneracy is true for all the different vectors used to assess alignments of the CMB features (because they are the vector representations of planes). Finally, the multipole vectors are unit vectors, providing further proof, if that were needed, that they do not define positions in R3.

Note that since the area vectors depend solely on the multipole vectors, then the area vectors also carry no position information, being determined purely by angular spherical co-ordinates. They, like the multipole vectors, originate at the point of observation by definition and they also are defined only up to a sign. They do not carry information about the position of the Earth (or any object in the Universe).

In references [[6], [7], [10]] Copi et al analyse the alignment of the area vectors of the quadrupole and the octopole with the dipole, ecliptic plane and the equinox. See for example figure 3. 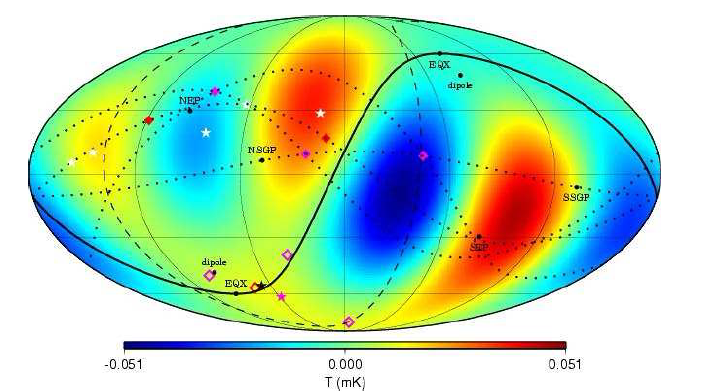 Since there are three area vectors for the octopole (and increasingly more with increasing multipole: six for l=4, 10 for l=5 etc), then cosmologists sought an alternative measure for assessing the alignment of the multipoles. The method, first developed by de Oliveira-Costa et al [12], is to find the vector or axis n around which the angular momentum dispersion:

is maximised (MAMD) for each multipole l, where alm are the spherical harmonic coefficients of Eq. 2, measured in a co-ordinate system rotated so that the z- axis is in the n direction. These are the MAMD vectors. This method results in one vector per multipole. The quadrupole MAMD vector can be shown to be in the same direction (under certain conditions that we needn’t go into here) as the quadrupole area vector, and the octopole MAMD vector lies near to the cluster of octopole area vectors. The MAMD vectors are the single measure used by the Planck team to assess the alignment of the multipoles. The Planck team in their major paper on isotropy and statistics of the CMB says this about these vectors:

“The plane in which most of the power of the multipole lies” is the plane where the sum of the squares of the absolute values of the multipole coefficients is maximized; and we can think of this as being defined by an axis around which the anisotropy variations of the CMB temperature is greatest. It is immediately clear that the plane passes through the point of observation by definition, as does the axis n. As we have seen before for multipole and area vectors, the sign of the MAMD vector is not defined, which means it encodes an orientation and has sign degeneracy; and again it carries no position information.

The various statistics described above have been used to assess the anomalous alignments of the dipole, quadrupole and octopole with themselves and the Earth’s ecliptic plane and equinox in multiple scientific papers. The alignments appear to be anomalous because the various features align more closely (ie the angles between the vectors are smaller) than would be expected if the features are independent. It’s not the purpose of this article to discuss the anomalous alignments per se – that has been done elsewhere – but to show that the various vectors and planes discussed by cosmologists in this context carry no position information and so cannot, as the neo-geocentrists claim, distinguish the location of the Earth in the Universe exactly nor approximately, nor indeed, at all.

For many years, the neo-geocentrists have been claiming that the alignments of the low-l multipoles with one another and with local features such as the ecliptic plane and the equinoxes is evidence for the central (or near-central, or special) location of the Earth in the Universe – indeed, as we have seen in this article “The CMB Alignment Challenge”, they have all made claims that the features point directly at the Earth.

In this somewhat more technical article, we have shown that the various vectors and planes do not carry any position information, and moreover, according to their definition, they cannot. Furthermore, we have seen that all the vectors derived from the CMB data have their origin at the point of observation, in our case the Earth9, by definition. They cannot, as the neo-geocentrists claim, distinguish the Earth directly or approximately (or, indeed, at all).

Since these conclusions are inherent to the mathematical definitions of the various vectors, it follows that the geocentrists’ claims that the CMB anomalies are evidence for a central or special location of the Earth cannot be justified on this evidence.

[3] The first few associated Legendre polynomials which are the ones that concern us are:

[4] Although this article discusses the multipoles only up to l=3 explicitly, its main point, that the vectors carry no position information, stands for all multipoles

[7] Copi, Huterer and Starkman, Multipole Vectors–a new representation of the CMB sky and evidence for statistical anisotropy or non-Gaussianity at 2<=l<=8, http://arxiv.org/pdf/astro-ph/0310511v2.pdf

[9] This is an approximation: I’m ignoring the fact that the WMAP and Planck satellites were located not at the Earth but at the Earth-Sun Lagrange point L2, almost a million miles from Earth, and the annual modulation of the orbit of L2 around the Solar System barycentre was averaged out in the data, making the barycentre the origin of observation