The New Geocentrism: Excessive Interest in Usury Comes to Naught 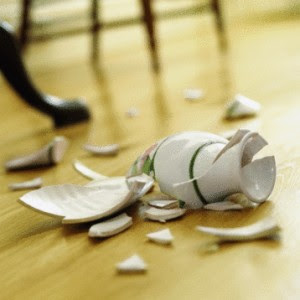 [Originally posted 15 June 2011]
The modern geocentrist fixation on their pet cause is like a monkey who reaches into a precious Ming vase to grasp a pebble. Intent only on holding onto that bit of rock and unable to extract his clenched fist, the monkey will happily smash the vase to get his “prize”, heedless of the priceless nature of the treasure he has wrecked.

It looks to me as if at least some of these individuals will do anything to hang onto their private judgment that geocentrism is taught as an article of faith, even if it means (were it possible) smashing the Catholic Faith itself. On Dave Armstrong’s blog, one “johnmartin” (a pseudonym) was perfectly content to assert that, “I’ve presented a list of doctrines that have been de facto denied by the modern church” and “I believe the church silence on the matter of geo[centrism] in the last 300 years is easily accounted for through either inept leadership or fear of the science establishment”. Three hundred years of doctrinally inept and cowardly Popes—gee, what faithful Catholic could fail to be content with such a simple explanation?

He offered as “proof” for this supposed ineptitude a whole panoply of issues which the Catholic Church had “stopped teaching”: the sinfulness of contraception, the indissolubility of marriage, the nature of and need for the sacrament of matrimony, the sinfulness of homosexual behavior, the inerrancy of Scripture, the Virgin birth, and the establishment of the sacrament of Holy Orders by Christ himself. It was painful to have to point out to this fellow Catholic the obvious, namely, that the Magisterium has explicitly taught each and every one of those things, right up to the present day.

To his credit, geocentrist Rick Delano didn’t join “johnmartin” in this brazen Church bashing. But he deployed his own example which he contends is the only other one that matches geocentrism: usury. According to Rick these two constitute the “unique” examples in all of Church history in which the Catholic Church has simply stopped teaching a doctrine of the Faith:

I have, as I said, personally been the beneficiary of several hours of direct instruction from Father Sweeney. I can assure my fellow bloggers on this thread, that any question of his fidelity to, familiarity with, or ability to expound (to at least seventy five levels of historical development), the teachings of the catechism, is, for me, beyond the slightest question. The man is simply a treasure, and I am going to do my utmost to try and get one of my sons up there to enroll in his course of study and, as a bonus, to make Father Sweeney’s life miserable with questions concerning, especially, the surrender of the dogmas against usury and geocentrism (hello Father Sweeney!)

I hope that all defenders of geocentrism will be sensitive to the ambiguity inherent in this (and only this- plus one other to my knowledge) instance of the magisterium proposing a binding doctrine under the ordinary magisterium, and then abandoning- not reversing!- it.

The unique nature of these two instances- the other being the condemnation of usury– require the utmost care in extending the same latitude the Church Herself extends. . . .

So is Rick right? Has the Catholic Church “surrendered” the dogma of usury? Does geocentrism have at least one lonely companion in doctrines supposedly “abandoned” by the Church?

Nope. Since Galileo’s time the doctrine of usury has been reaffirmed by the Magisterium numerous times, right up to our present day. The only way this view gets any traction at all is if people embrace the mistaken view that usury is identical with interest-taking, or with excessive interest. Neither view is correct (the tongue-in-cheek title of this article aside).  My own contribution to this question in This Rock magazine, which I now consider to be somewhat simplistic but still essentially correct, may be found here.

Misunderstandings aside, the magisterial view of usury has been reiterated numerous times. The most solemn instance is, of course, Pope Benedict XIV’s 1745 encyclical Vix Pervenit, On Usury and Other Dishonest Profit. And Pope Leo XIII wrote in Rerum Novarum §3 in 1891:

The mischief has been increased by rapacious usury, which, although more than once condemned by the Church, is nevertheless, under a different guise, but with like injustice, still practiced by covetous and grasping men.

9 Q: Is it only by theft and robbery that another can be injured in his property?

A: He can also be injured by fraud, usury, and any other act of injustice directed against his goods.

The acceptance by human society of murderous famines, without efforts to remedy them, is a scandalous injustice and a grave offense. Those whose usurious and avaricious dealings lead to the hunger and death of their brethren in the human family indirectly commit homicide, which is imputable to them.

From Pope John Paul II, Address to the Members of the National Council of Anti-Usury Foundations (1999):

I know well, dear friends, the difficulties that you face. But I know that you are determined and united in fighting this serious social evil. Continue to combat usury, giving hope to individuals and families who are its victims. The Pope encourages you to pursue your generous work to build a more just society, one of solidarity, and more attentive to the demands of the needy.

Finally, three final precepts are listed for our examination of conscience: to be faithful to our word and to our oaths, even in those cases where the consequences will be detrimental to us; not to practice usury — a plague that is a disgraceful reality even in our days that can place a stronghold on the lives of many people; and finally to avoid all corruption in public life, another commitment that we could also rigorously practice in our time . . .

The first false god [is] the violence which humanity unfortunately continues to resort to even in these bloody days,. . . Accompanying this idol is an immense procession of wars, oppression, perversions, torture and killing, inflicted without any trace of remorse. . . . the second false god is robbery which is expressed in extortion, social injustice, usury, political and economic corruption.

The prophetic tradition condemns fraud, usury, exploitation and gross injustice, especially when directed against the poor . . .

Although the quest for equitable profit is acceptable in economic and financial activity, recourse to usury is to be morally condemned: “Those whose usurious and avaricious dealings lead to the hunger and death of their brethren in the human family indirectly commit homicide, which is imputable to them”.[714] This condemnation extends also to international economic relations, especially with regard to the situation in less advanced countries, which must never be made to suffer “abusive if not usurious financial systems”.[715] More recently, the Magisterium used strong and clear words against this practice, which is still tragically widespread, describing usury as “a scourge that is also a reality in our time and that has a stranglehold on many peoples’ lives”.[716]

508. What is forbidden by the seventh commandment?

Above all, the seventh commandment forbids theft, which is the taking or using of another’s property against the reasonable will of the owner. This can be done also by paying unjust wages; by speculation on the value of goods in order to gain an advantage to the detriment of others; or by the forgery of checks or invoices. Also forbidden is tax evasion or business fraud; willfully damaging private or public property; usury; corruption; the private abuse of common goods; work deliberately done poorly; and waste.

The heart of this fidelity to the divine word consists in a fundamental choice of charity towards the poor and needy: ‘The good man takes pity and lends … Open-handed, he gives to the poor” (vv. 5, 9). The person of faith, then, is generous; respecting the biblical norms, he offers help to his brother in need, asking nothing in return (Deuteronomy 15: 7-11), and without falling into the shame of usury, which destroys the lives of the poor.’

I would be the first to agree that additional catechesis would help the faithful to better understand the necessary distinction between usury and the taking of interest. But it is patently false to claim that there has been a “surrender” or an “abandonment” of the doctrine of usury. It is explicitly taught by the Magisterium to this day and this alleged parallel with geocentrism fails completely.

Of course the parallel fails in another way too. The Holy Office, with the Pope’s approval, gave positive permission in 1820 for non-geocentric views to be disseminated in the Church. The Church has given her imprimatur and nihil obstat to dozens, perhaps hundreds, of works that present a non-geocentric cosmology as fact. Pope Benedict XV stated openly in a papal encyclical that it’s not at all problematic to hold that the earth isn’t the center of the universe. Popes Leo XIII and Pius XII made official in papal encyclicals the Tradition expressed best by Sts. Augustine and Thomas that the sacred Scriptures do not contain details of the physical universe, but rather speak in ordinary language according to what appears to men. Popes Pius XII, John Paul II, and Benedict XVI have praised Galileo and John Paul II has stated publicly that the handling of the Galileo case rested on “errors”. The Magisterium has given the faithful every indication that they need not have any scruple to hold to non-geocentric views of the universe. There is no possible parallel here to usury, which has been consistently and repeatedly condemned.

Which only goes to show you that you can’t get away from the fundamental axiom that if you start with a bad premise you will inevitably reach a bad conclusion. Geocentrism was never taught as a doctrine of the faith by either the ordinary or extraordinary Magisterium. That is the simple reason why there is no reiteration of it. No need for exaggerations, conspiracy theories, ineptitude, or cowardice.

I know this is incredibly shocking and controversial, but ordinary, faithful Catholics can feel perfectly comfortable—and orthodox—while holding to a non-geocentric view of the universe. Not that that will stop the new geocentrists from making a wreck of their own faith as they cling to this pebble of a scientific theory, of course.