Geocentric Exaggerations: The Catechism of Trent 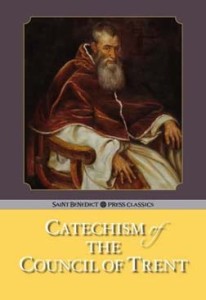 In my last piece on the new geocentrism I pointed out how modern geocentrists consistently exaggerate the nature and authority of the various ecclesiastical documents that touch on the topic.

Another example of this may be found in how they treat some passages in the Catechism of the Council of Trent. Here’s what a leading geocentrist has to say about it:

One of the clearest official and authoritative statements from the Catholic Church defending the doctrine of geocentrism comes from the catechism issued under a decree of Pope Pius V, known as The Catechism of the Council of Trent or more simply, The Roman Catechism. (Bob Sungenis, GWW2, 163).

“One of the clearest official and authoritative statements”….keep that phrase in mind as we look into this a little further. Sungenis deploys several passages from the Roman Catechism to try and make this case. Here’s one of them:

He also gave to the sun its brilliancy, and to the moon and stars their beauty; and that they might be for signs, and for seasons, and for days and years. He so ordered the celestial bodies in a certain and uniform course, that nothing varies more than their continual revolution, while nothing is more fixed than their variety.

Now a lot of non-geocentrists are going to look at that and say, Okay, but I agree with that. How exactly does that clearly teach geocentrism? Sungenis deploys another passage from the Catechism of Trent to try and answer that:

Rather, to expel any doubt about what objects are revolving the catechism adds that the sun, moon and stars have a “continual revolution.” Although the unspecified reference to “revolution” might cause a heliocentrist to infer that the sun’s revolution does not necessarily mean it is revolving around the Earth, a few pages later the catechism disallows that inference by stating the following:

The earth also God commanded to stand in the midst of the world, rooted in its own foundation and made the mountains ascend, and the plains descend into the place which he had founded for them.…

The problem for Sungenis is the context that he left off after the ellipses makes his application of this passage to the earth’s place in the universe untenable. Let’s have the whole passage, including what he omitted:

The earth [terram] also God commanded to stand in the midst of the world [mundi], rooted in its own foundation, and made the mountains ascend, and the plains descend into the place which he had founded for them. That the waters should not inundate the earth, He set a bound which they shall not pass over; neither shall they return to cover the earth. He next not only clothed and adorned it with trees and every variety of plant and flower, but filled it, as He had already filled the air and water, with innumerable kinds of living creatures.

While mundus can mean “universe”, it can also just mean “world”, e.g. Mundus vult decipi, ergo decipiatur, “The world wants to be deceived, so let it be deceived.” But from the whole context it appears that the Catechism is using the word “earth” (terra) in terms of the “land”, as distinct from the “air” and “water” and the word “world” (mundus) to mean the whole globe. (This echoes the wording of Gen 1:10, “And God called the dry land, Earth [terram]”.) Thus in this context “rooted in its own foundation” means that the land is fixed in place with relation to the water, not in relation to the cosmos. If “earth” here means the entire globe then the passage ceases to make sense, since in the last sentence the “earth” is specifically contrasted with the “air” and “water” and God certainly didn’t cover the entire globe, including the air and water, “with trees and every variety of plant and flower”.

This passage, then, doesn’t represent a description of the globe’s place in the universe and it has no application to geocentrism. I should note that the English version of this Catechism by J. A. McHugh and C. J. Callanon which appears in many places on the Internet (e.g. here) has the heading “Formation of the Universe” over this section. This is a mistranslation of the Latin, De terrae creatione, which is correctly translated “Creation of the earth” (as in, e.g. the translation by J. Donovan (link). It is perhaps this mistranslation—along with an insufficient attention to context—that has misled certain geocentrists to read this as if it addressed the earth’s place in the universe.

There are a couple of other passages Sungenis cites to try and bolster this notion that the Catechism of Trent teaches geocentrism, but they get weaker and weaker.

But though God is present in all places and in all things, without being bound by any limits, as has been already said, yet in Sacred Scripture it is frequently said that He has His dwelling in heaven. And the reason is because the heavens which we see above our heads are the noblest part of the world, remain ever Incorruptible, surpass all other bodies in power, grandeur and beauty, and are endowed with fixed and regular motion.
…all goods both natural and supernatural, must be recognised as gifts given by Him from whom, as the Church proclaims, proceed all blessings. If the sun by its light, if the stars by their motion and revolutions, are of any advantage to man; if the air with which we are surrounded serves to sustain us…nay, those very causes which philosophers call secondary, we should regard as so many hands of God, wonderfully fashioned and fitted for our use, by means of which He distributes His blessings and diffuses them everywhere in profusion.

Obviously, non-geocentrists can affirm all that this Catechism says. There is no explicit affirmation of geocentrism here whatsoever; these are generic statements that fit modern cosmologies equally well. Yet despite the weakness of this evidence in favor of his pet cosmology, Sungenis speaks of the “Roman Catechism’s dogmatic assertion of geocentrism” (GWW2, pp. 164f.). This is a manifest exaggeration.

We have seen that, far from containing a “dogmatic assertion of geocentrism”, the Catechism of the Council of Trent says nothing at all on the subject. The evidence strongly suggests that this is a modern, private interpretation of the Catechism based on a mistranslation and a misunderstanding. The following fact should pretty much clinch that case.  Sungenis claims that this is, “One of the clearest official and authoritative statements from the Catholic Church defending the doctrine of geocentrism. . . ” But surely, if that were true, this would have been the very centerpiece in the original Galileo controversy. And yet this source was was never, as far as I have seen, brought up either by the Congregation of the Index or the Congregation of the Holy Office during the Galileo affair. The silence is deafening.

The Catechism of the Council of Trent does not teach geocentrism as an article of faith. And of course, the Church’s next universal Catechism, promulgated by Pope John Paul II, also says not a word about geocentrism either. And yet the Holy Father stated in Fidei Depositum IV:

The Catechism of the Catholic Church, which I approved 25 June last and the publication of which I today order by virtue of my Apostolic Authority, is a statement of the Church’s faith and of Catholic doctrine, attested to or illumined by Sacred Scripture, Apostolic Tradition and the Church’s Magisterium. I declare it to be a valid and legitimate instrument for ecclesial communion and a sure norm for teaching the faith.

“[A] statement of the Church’s faith and of Catholic doctrine…” But not a peep about geocentrism. That silence too is deafening.