What Sources in the Galileo Case Must Be Considered? 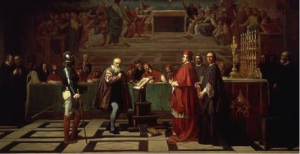 In the Galileo case we need to consider three important documents in light of a strict canonical interpretation.  First, there is a 1616 report issued by a group of theologians in response to a commission by the Holy Office.  This document was never promulgated and is not magisterial.  It was informational and advisory.  The Pope acted upon this document by having Galileo personally warned by Cardinal Bellarmine not to teach Copernicanism as a thesis anymore.  We will see that this document was cited, but not adopted by the 1633 decree against Galileo.  But this does not elevate the authority of the document itself and it remains non-magisterial.

Next, there is the 1616 decree of the Congregation of the Index, placing the works of Copernicus and a few other works on the Index of Forbidden Books.  This document is magisterial, but it is clearly disciplinary.  As the Catholic Encyclopedia notes rightly, the Congregation of the Index was “absolutely incompetent to make a dogmatic decree”, that is, it did not have responsibility delegated to it to make a doctrinal ruling in this or any other matter.  This is important for two reasons.  First, a number of scholars have argued that the later canonical proceedings against Galileo are at least canonically questionable since he was charged with having held a doctrine that had been “declared and defined to be contrary to Scripture.”  This is where the canonical competence of the Congregation of the Index becomes important since, if it was incompetent to issues such a declaration and definition, then there were no grounds on which to accuse Galileo of having transgressed one.  I won’t take a firm position on this question, but will agree that the arguments are at least plausible.  More to our point in this study, I would note that this disciplinary action of the Congregation of the Index has been duly abrogated by the Magisterium, first through the removal of all Copernican works from the Index and ultimately through the elimination of the Index altogether.  Thus it is no longer of any consequence to Catholics.
Finally there is the 1633 decree of the Congregation of the Holy Office condemning Galileo.  I think that all parties are agreed that this document is the most important and most authoritative in the entire controversy and therefore we will focus most of our attention here.
Let’s start by noting that since this represents a canonical condemnation, then according to the  Church’s own immemorial standards it must be interpreted strictly.  That is, it must be taken as narrowly and as affecting as few people as possible.  Now let’s see what conclusions flow from a strict reading of this document.
Back    Next